Posted on January 16, 2015 by Lindsey Crittenden

…that when he looked, and she
looked up at him, their looks so merged in one
the world outside grew vacant, suddenly,
and all things being seen, endured and done
were crowded into them: just she and he…
here at the point and at this point alone:-
see, this arouses fear. Such fear both knew.

When I first encountered those words, my body thrummed. I was weeping without having realized I was moved. I had found my way home.

This happened in 1996, at a small church in Berkeley, California, and the words were spoken as part of the sermon. I hadn’t set foot in church in years, and I had done so that morning under duress. No one forced me, I went willingly—but I went because I quite literally did not know what else to do with myself.   Anxiety riddled me so completely that the only small reprieve I could think of was to get myself a block away to sit in a pew among strangers for the simple fact that, surrounded by others, I might not lose my mind.

What I heard that day—and read over and over, when I later found the poem in its entirety—changed my life. It brought me back to church as an adult, it brought me to prayer, and it made me want to live. Well, that’s not entirely true—I hadn’t wanted to die, necessarily, but I had wondered too often how much more pain I could bear. Yes, I was depressed—deeply so, although I managed to function in ways that if you met me at the supermarket or in class you might not have known.

But I digress. I’ve written about that return to church and how prayer started to loosen anxiety’s tight grip on me, both in essays and a memoir, and that’s not really the topic here. 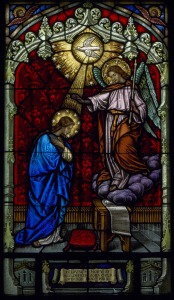 This morning, I want to write about the annunciation. For that’s what those lines are about. The “he” and “she” of the poem, by Rainer Maria Rilke, are not a romantic couple, or a brother and sister, or any of the other relationships that came to my mind and made me weep when I heard the poem. No, the “he” is the angel Gabriel; the “she,” the Virgin Mary.

At All Saints’, the Episcopal parish where I am a member, the Building and Grounds Committee has just finished repairing and cleaning and reinstalling eleven stained-glass windows. You probably won’t be surprised to read that I helped support the renovation of the window showing the Annunciation.

I went to Sunday school enough times as a kid to know the story, well before I heard Rilke’s poem in church. The angel appears to Mary, tells her she’s going to bear a baby, and she agrees.  Be it unto me, according to your word. I’ve always been drawn to the story as, well, story—the characterization in those 13 verses (Luke 1: 26-39) of a young girl being given incomprehensible, stunning information. She is “troubled,” she “wonders in her heart what kind of greeting this might be.” She asks the angel the question on all our minds: Just how can this be, if I’m a virgin?

What I love, in part, about Rilke’s poem is how it focuses not on doctrine or an attempt to explain the unexplainable. It avoids any parsing of her being “come upon” by the Holy Spirit and “overshadowed by the power of the Most High.”  Instead, it cracks intimacy wide open: “just she and he: see, this arouses fear”!

Have you ever felt it, that moment with a person you may not even know very well, when a piece of information or a revelation of inner self is given up? When some boundary is crossed, willingly, and what opens up is a whole new kind of spaciousness? I’d felt that, in glimmers, in moments that were later—through death or heartbreak or betrayal—snatched away. And I think what I heard that morning, and why it made me weep, saved my life. Oh, I would’ve continued existing without it, but it made relationship possible in ways I had never known.

Here’s the entire poem, with thanks to Dan Clendenin at Journey with Jesus.

The angel’s entrance (you must realize)
was not what made her frightened. The surprise
he gave her by his coming was no more
than sun or moon-beam stirring on the floor
would give another, — she had long since grown
used to the form that angels wear, descending;
never imaging this coming-down
was hard for them. (O it’s past comprehending,
how pure she was. Did not one day, a hind
that rested in a wood, watchfully staring,
feel her deep influence, and did it not
conceive the unicorn, then, without pairing,
the pure beast, beast which light begot, — )
No, not to see him enter, but to find
the youthful angel’s countenance inclined
so near to her; that when he looked, and she
looked up at him, their looks so merged in one
the world outside grew vacant, suddenly,
and all things being seen, endured and done
were crowded into them: just she and he
eye and its pasture, visions and its view,
here at the point and at this point alone:-
see, this arouses fear. Such fear both knew.

This entry was posted in community, faith, prayer, reading, spirituality. Bookmark the permalink.