Posted on April 5, 2013 by Lindsey Crittenden

Yesterday the carpet cleaners came.  In our household, this means picking up the piles of books, laundry too dirty to put back in the drawer but not dirty enough for the laundry basket, and various not-yet-read magazines in order to clear space from said carpet.  In so doing, I faced the fact of all those issues of AWP Writer’s Chronicle and Poets & Writers.

I started reading Poets and Writers back in its black-and-white newsprint cover days. When I left New York to start a graduate program in creative writing in the wilderness of California’s Sacramento Valley, my publishing colleagues sent me on my way with a gift subscription.  Ever since, I’ve had an off-on thing with the magazine.  Getting a new issue in the mail made me feel, in the early days, like a real writer.  That is, some days, eager to pore over the listings for places to send early stories, contests to enter, and writing wisdom to sop up.  And on other days, consumed with dread or possessed by the not-so-little green monster.  Some 22-year-old had just won a grant.  An editorial assistant I once ignored at the coffee machine in the Random House kitchen was being hailed at “fiction’s newest champion.”  Reading about other people’s publishing success could, on a bad day, plummet me into a nasty vortex of competitiveness, despair and my own failings.  I began to feel—in fantasy only, please remember—like the Tonya Harding of writing competition.  Not that I’d ever wish injury on someone, just maybe a little less sudden stellar success.

Come to think of it, on a bad day, anything about writing could wreak this havoc on me.  Books like John Gardner’s The Art of Fiction and Janet Burroway’s Writing Fiction (the latter of which I now recommend to my students) could do such a number on me that I’d throw the book across the room—or drop it in a stupor.

“Describe a barn as seen by someone who has just committed murder. Do not mention the murder,” Gardner says.  Huh?  Now, of course, I see where he was going with that particular exercise, but at the time, his oh-so-serious, oh-so-self-important tone made me feel I’d never make it.  Don’t. Fuck. Up.

What was wrong with me, that those how-to-write books in front of which others knelt in abject homage left me bereft?  Clearly, I didn’t have what it took to write.  But I kept writing.  I kept fucking up.

And then I discovered Bird by Bird.  This was before Anne Lamott became the star she is today.  After writing beautiful novels that barely sold, she hit the big time with Operating Instructions and then wrote Bird by Bird.  Probably because I’d already read and loved a few of those early novels (Rosie; All New People), I trusted her.  And the fact that I’d heard how she’d had to scrape by before hitting it big didn’t hurt, either.  Yes, John Gardner and Janet Burroway paid their dues, too—but Anne Lamott made me laugh. She wrote about radio station KFKD (K-Fucked) and Shitty First Drafts.  You will fuck up, she pretty much came out and stated.  What relief!  You will feel like Tonya Harding. Phew!  Yes, you will get miserable with competitive angst and do a number on yourself if you pay too much attention to who won what prize in Poets & Writers.

Around that time, too, I began to go to writers’ residencies and conferences, places like Ucross and Writers@Work.   I’d won entrance to such places, which meant I got my own little blurb and photo in Poets & Writers.  But the real benefit of such rewards came from sitting around the dinner table or the sofa in the lounge late at night, discovering that I wasn’t the only one who dreaded the arrival of Poets & Writers in the mail.

Now don’t get me wrong.  I still get the magazine and I recommend it to students.  But I also suggest that it’s OK if the back issues pile up, waiting for a day when you feel strong enough to encounter an article about someone half your age winning a prize you’ve entered twenty times.

How-to books on writing fill shelves and shelves, and continue to sell.  We look to them for a trick, an answer.  We can’t help it.  Just this morning, going through email, I clicked on Alison Presley’s blog with its header of “Writing Advice from Writers.”  It shows photos of  writers’ hands, on which are inked various tidbits: Write. Finish Things. Keep Writing.  And Start the Next One.  And the best of the lot, from Lev Grossman:  Don’t take anyone’s writing advice too seriously.  By necessity brief enough to fit on the palm of a hand, they remind me of the quotes I’ve clipped from articles over the year, pasted to my wall and magnetized to my fridge.  Another favorite, from Samuel Beckett:  Fail.  Keep trying.  Fail better.

I love this stuff.  I eat it up.  I just try not to take it too seriously.  Maybe I should, though, if only before the next carpet cleaning.

What’s your relationship to writing advice?  What’s helped you?  Hurt you? 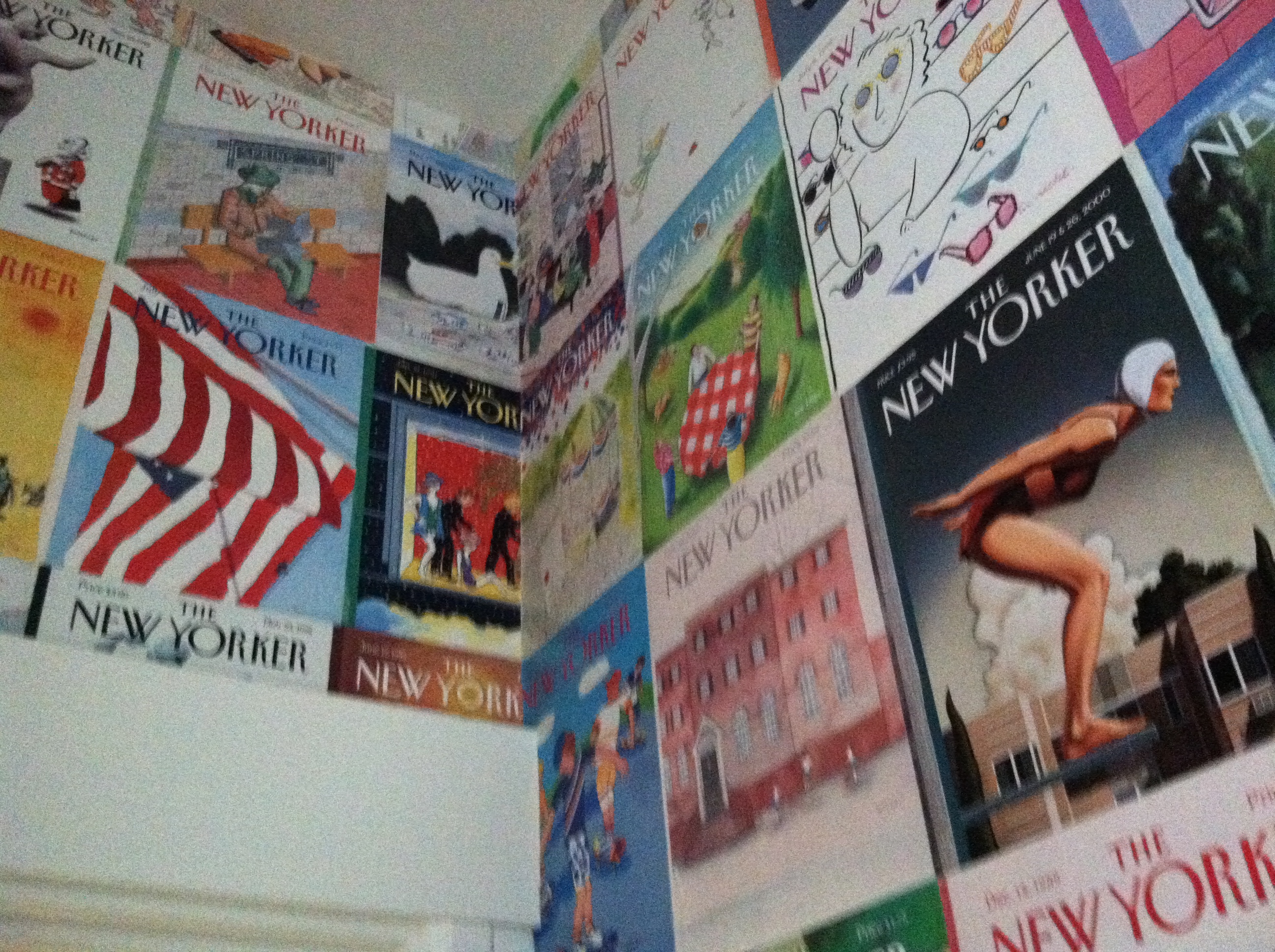 One idea for accumulated back issues — wallpaper!